On Veterans Day we posted a story about Peter D., a World War II veteran from New York who recently visited our nation’s capital as part of the Honor Flight. Andy M of Dalzell, South Carolina sent us a wonderful story and photo from his recent Honor Flight trip this past September…


Andy is a veteran of the Korean War, and a few years ago received an invitation to visit Washington, D.C. for the 60th anniversary of the Korean War. At that time he was unable to go, but when Honor Flight extended a second invitation earlier this year he happily accepted the opportunity. 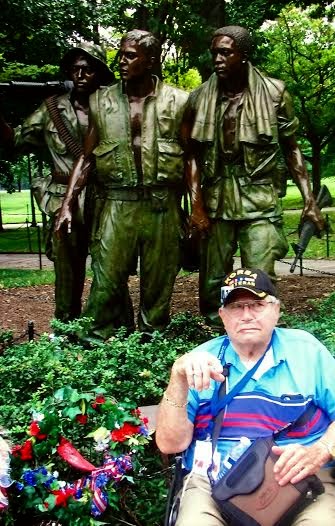 Andy got on his flight from Columbia, South Carolina at 6 AM with his portable oxygen concentrator in hand. Once he landed, his group was greeted, given breakfast, and was boarded onto their tour buses to begin their day. “The trip went so well. They had assistants who pushed some of us around in wheelchairs and took real good care of us,” says Andy. His group visited the Korean War Veterans Memorial and many other monuments around Washington, D.C.  Additionally they stopped at Arlington National Cemetery to pay their respects to their fallen comrades.

That evening on his return home, his tour group was welcomed back by groups of Boy Scouts, Girl Scouts, and members of the Honor Guard. It was a great way to end the trip. “It was a very nice day and my portable oxygen concentrator took good care of me. This 86 years old boy thanks you for taking care of him with your service.” Open-Aire is very happy for the opportunity to have helped Andy out on his Honor Flight trip, and we thank him for his service to our country.
Posted by Open-Aire at 6:01 AM